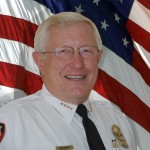 After serving in the United States Army, John W. Harris has spent over forty years in American law enforcement with over twenty years experience as a police chief. He retired from the Tucson Police Department in 1993 as an Assistant Police Chief to become the Chief of Police at Pleasant Hills, Missouri. He then spent eight years as the Police Chief at the Springfield, IL Police Department, retiring from Springfield in 2003. He took a position in Evanston, Wyoming as the Police Chief and then returned to Arizona to become the Chief of Police in Sahuarita, AZ, retiring in September 2014. John was also a reserve game warden for the Arizona Game and Fish Department from April 1983 to May 2015.

John has a bachelor’s degree in Law Enforcement from the University of Arizona and a graduate degree from Western Illinois University. He graduated from the FBI National Academy, the Arizona State Executive Development Course, the FBI LEEP course, and Illinois Standards and Training Executive Development Course. He has been a certified law enforcement instructor since 1978, covering a variety of topics.

John was also appointed to the Arizona Game and Fish Commission, the Arizona Commission for Appellate Court Appointment, and is a past president of the Arizona Association of Police Chief. John’s extraordinary and diverse management experiences combined with a unique, relaxed presentation style make him the perfect addition to any conference or training event. Chief Harris is also the driving force behind “Developing Successful Staff Skills,” a 32 hour training event now offered by Winning Mind Seminars.